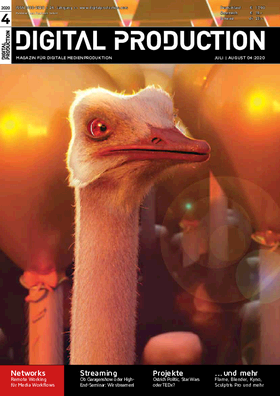 Cancelled because of Covid-19.

We are looking forward to talking to you via phone or the Internet. Please contact us.

Cancelled because of Covid-19.

With TIXEL's software solution, we now have a transport layer for our high-volume file transfers that can be quickly integrated into our system landscape and workflows.

Because of the universal concept and the easy to use REST API of TIXstream FX we were able to integrate TIXEL's acceleration components in our new platform in a very elegant and efficient way. Our users are excited and now benefit from significant shorter transfer times and convenient up- and downloads – also on poor internet connections.

You find us at the well known booth location in hall 7.

The broadcasters of ARD, First German Television, have implemented a new system for file exchange: Media File Transfer (MFT) 2.0. Continuously growing transfer volume as well as integration of various media types for radio, television and online requires a common, universal platform for file exchange. Seamless integration with various systems as well as media exchange based on a common metadata schema lead to some specific requirements regarding system design.

New booth number – same place: IBC 2018 gets a new floor plan. However, you will find us at the well known booth location in hall 7.

PetaData Corporation and TIXEL GmbH announced their partnership. PetaData specializes in supplying and servicing hardware and software solutions for the media and IT industry.More... (Press Release)

TIXEL and PIXSPAN have developed a new software that combines the most efficient lossless image compression with the most efficient WAN file transfer technology. The upcoming release of TIXstream file transfer software will be available with integrated support for lossless image compression for DPX, CINEON, OpenEXR, TIFF, ARRIRAW, Canon Raw, DICOM, and GeoTIFF (press release).

“TIXway software seamlessly integrates at the transfer endpoints and transparently boosts transfer speed in the WAN to the level we experience in our LAN.” (M. Blandfort, IVZ)

IVZ as IT service provider for German public broadcaster ARD operates a central large scale media archive with facilities in Berlin and Leipzig. They need to handle more than 4 petabytes content every year. Transfers to and from the individual studios and for data exchange between the two redundant distributed archive systems require high speed data transfer. (press release)

Meet with TIXEL at CCW 2014. On November 12th and 13th, 2014 this years CCW SATCON will open its doors at Javits Convention Center in New York City.

Stop by TIXEL's booth 641 to learn more about our new products TIXstream Express and TIXway Universal.

The IVZ as a service provider for German public broadcaster ARD is currently connecting studios to a central distributed archive located in Berlin and Leipzig. This requires implementation of high-speed remote access to archive content for the individual studios as well as efficient data exchange inside the redundant distributed archive system.

Please also reserve some time for our FIMSs presentations on workflow acceleration:

As in the past we actively support and sponsor the FIMS standardization activities at NAB 2014. TIXEL’s CTO Andreas Aust is giving a joined presentation with Joerg Houpert from Cube-Tec: A Global Accessible FIMS-based Media QC and Repair Service. Monday, April 7, 4:30pm and Wednesday, April 9, 3:30pm at the FIMS/AMWA/EBU booth N1231.

If you are attending this year’s CeBIT in Hannover/Germany (March 10th to 14th) we are looking forward to seeing you. Please contact us for an appointment!

“The transfer of a 360 Megabyte file took me only 25 minutes in total” Anton Schreiner, technical director of the SWR studio in Tuebingen, says. “Now we can achieve transfer rates close to our theoretical maximum speed of 2.3 Megabits/s. Until now we were only able to reach 400 kilobits/s at max.”

TIXEL's most recent solutions at this year’s Content & Communications World (CCW), November 13 and 14 at the Jacobs Javits Center in NYC. At booth #761 with our new sales partner Incite Media Solutions (IMS).

Learn more about TIXEL's most recent solutions at the IBC in Amsterdam, 13. to 17. September, booth 6.A05.

If your FTP transfers with partners overseas runs slower than you expect – try TIXway-on-Demand. No extra software. No mess up of your processes and work flows. No investment. No risk. Just fast transfers.

Last six months have been an extremely productive period at TIXEL and we extended our product-line for transfer acceleration by a variety of exciting features (NAB in Las Vegas, April 06 – 11).

Once again TIXEL has got some amazing news regarding fast data transport, e.g. TIXway Express now also running on Windows. CeBIT in Hannover (05 to 09 March).

Once again TIXway’s FTP acceleration performance and unrivaled ease of integration has been proven - this time by the German IRT (Institut für Rundfunktechnik) - the independent institution and trustworthy intermediary for content providers, network operators and manufacturers. (Press Release)

New features: New strong full-speed AES encryption on the WAN link • Enterprise edition with up to 2.5 GBit/s • New easy to use web based configuration • New simplified deployment with Live-OS for evaluation and installation. Learn more...

A quick path through the WAN for any application producing data on standard out.

TIXway 1.2 comes with an intuitive web based user interface for configuration and license management.

The most recent release of TIXstream with many new convenience features is available now. TIXstream 2.9.2 comes with improved usability for the tixcp command line copy tool.

TIXEL actively takes part in the FIMS initiative of EBU and AMWA. The framework will provide a flexible approach to service oriented content production.

Simply put a little box in your network and boost your FTP transfer rates on the wide area link – without the need to modify your tool chain. TIXEL released new attractive entry level solutions. Read more...