TIXEL offers highest transfer speeds and fastest replication of huge amounts of bulk data. This allows significant acceleration of global workflows in manifold areas of application. Moreover TIXEL solutions are enabler for novel workflows which where impossible to implement so far.

TIXEL solutions are used in several real-life scenarios with high demands regarding data transfer. Read about the results obtained so far. 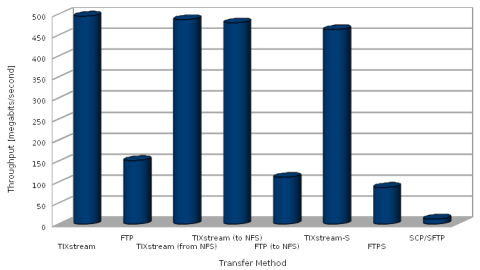 While FTP provides up to 154 Megabits/s, depending on current network load, TIXstream provides a transfer rate of 496 Megabit/s – constantly and independent of other network traffic. The difference in speed and efficiency gets even more significant when comparing SFTP and SCP with TIXstream-S: while FTPS delivers 88 Megabits/s, SCP/SFTP 13 Megabits/s TIXstream-S runs at 464 Megabits/s – on the same platform.

Switching from FTP to TIXstream in batch processes is pretty straight-forward.

Transmitting a 2h Movie from LA to London in Realtime 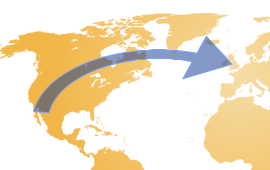 “As part of the post production delivery of a movie, digital master files are delivered to facilities around the world so that film and digital prints for theatrical exhibition are manufactured in time for the film’s opening. Often those schedules are squeezed due to the lengthy creative and approval process, making the final steps of delivery challenging for all parties involved.”

In many cases shipping hard disks is still the standard way of transferring content. Apart from pure delivery time this involves additional copies from SAN to disks and back from disks to SAN at the destination. Solution provider DBR360 (formerly Core 180) offers a solution based on TIXstream's as file transfer engine.

“The entire 2-hour uncompressed high definition data file of 20th Century Fox’s “A-Team” was transferred SAN to SAN from EFILM® Hollywood to Deluxe Digital London in just two hours. In addition to EFILM® Hollywood and Deluxe Digital London, Deluxe Express™ is connected to Deluxe New York. Efforts are already underway to expand to Deluxe’s other post-production facilities around the world.” The whole story at DBR360.

Many workflows in media still rely on standard FTP as transfer mechanism. A provider for media services in the cloud was looking for a solution to accelerate these transfers for ingesting content from customers as well as transferring content within the cloud.

TIXway was installed in New York and Los Angeles close to FTP client and server nodes. LA and NY were interconnected via an MPLS link. Depending on file size transfer rates were boosted from 6 to 89 Mbit/s (8 Megabyte) or 7 to 138 Mbit/s (2 Gigabytes). Thus transfer times could be reduced to 1/15 or 1/20.

Maximum transfer rate in this scenario was limited by the hard disk of used – this USB disk was just able to deliver 18 Megabytes/s.

A storage manufacturer evaluated solutions for accelerated WAN transfer. The measurements were executed at an independent M&E company.

The TIXstream-based setup was 4 times faster than the competitor’s configuration. Moreover, using TIXstream resulted in less dropped packets. Even more important, the characteristics of network traffic is way smoother with TIXstream: while the competitor’s solution acts quite bursty, TIXstream works with a perfect constant data rate.

A solution provider for storage and network transfer evaluated TIXway for FTP transfer acceleration. “On a 10Gbit link with 200ms latency and 0.1% packet loss, regular FTP was hovering around 1.5 MB/sec. When I routed my FTP through TIXway, it soared to over 125 MB/sec.”

This speedup factor of 83 means transferring 7.3 Gigabytes in one minute instead of waiting for it for 1h 23minutes.

Beyond 10G - TIXcluster in a 100G Production Network

Beyond 10G - TIXcluster in a 100G Production Network

By using TIXstream they achieved a sustained file transfer rate of 90 gigabits per second resulting in 90 % saturation of the link – without any tweaking.

This data rate is available instantly (i. e. without start-up delay) and allows to copy more than 2 DVD images per second – 630 gigabytes per minute or 37 terabytes per hour – agnostic to content and file systems.

In many scenarios, the FC storage system along with the file system was the bottleneck. Moreover the 50 km link (even the extended link with 450 km) does not put high demands on wide area capabilities.